Now out in paperback... 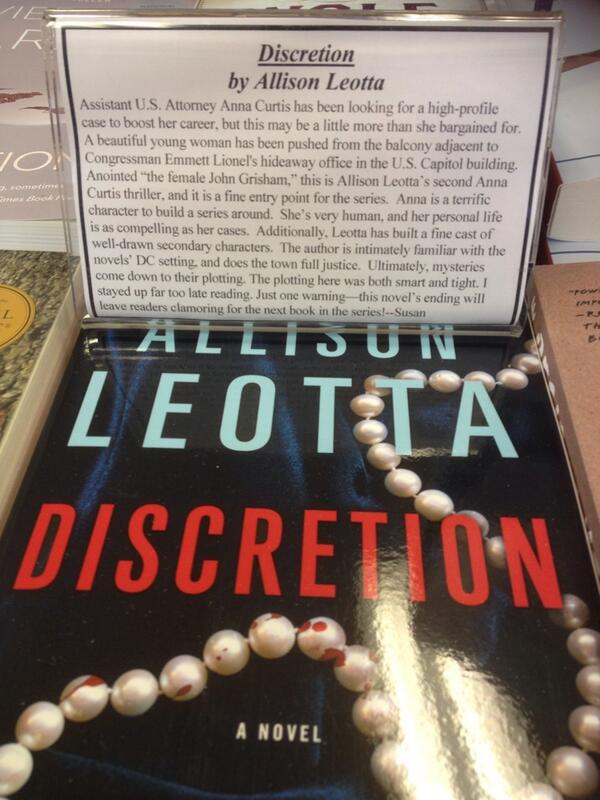 So, for readers who were wondering about these "shelf talker" reviews I mentioned in my last post, shelf talkers are the little signs you've probably seen written by bookstore employees recommending their favorite titles.  As a one-time top 100 book reviewer on Amazon.com, I write a lot of them.  Bookstores really like when the staff write these things, but one day I asked my manager, "Am I writing too many shelf talkers?"  And he was like, "If you have to ask the question..."  I am undeterred.

Several books I reviewed last year (and a few I never got around to) have recently come out in paperback, including some that made my top 10 list for the year.  Those books are noted by an asterix (*).  Here for your browsing pleasure is a selection of recent paperback releases:


The Ocean at the End of the Lane
by Gaiman, Neil (William Morrow Paperbacks)
Neil Gaiman’s first novel for adults in 8 years is a heady combination of fantasy, horror, nostalgia, and coming-of-age tale. Like all of Mr. Gaiman's work, there is much subtext to be mined. One could discuss the fascinating Hempstock women at length--their mythic origins and their relationship to other Hempstocks in the author's catalog. Or, you could concentrate on how the author examines adulthood from a child's perspective and childhood from an adult's perspective. Or, you could identify the influences of numerous other writers on this work, and explore the importance of literature in our lives and the power of story within the tale. What I'm saying is, that while The Ocean at the End of the Lane may be short on page count, it's quite long on substance. This one’s fantastic--in every sense of the word!

Bad Monkey
by Hiaasen, Carl (Grand Central Publishing)
As I read the opening pages of Bad Monkey, I was hit by an overwhelming sense of Hiaasen-ness. More than anything, it was the protagonist

that won me over. That would be police detective (demoted to restaurant inspector) Andrew Yancy. He’s determined to solve a case involving a disembodied arm and get reinstated. Mr. Hiaasen has constructed an enjoyable mystery and a fun police procedural. But of course, added to the mix are all the wackiness of both Hiaasen and South Florida. Possibly they are one in the same. There are fraud perpetrators, real estate speculation, voodoo priestesses, truly filthy restaurants, and, yes, a really bad monkey. Bad Monkey will go down smooth with an umbrella drink on the beach. And if you can’t have the umbrella drink or the beach, it just might be your consolation.

& Sons *
by Gilbert, David (Random House Trade Paperbacks)
This novel opens at the funeral of Charles Topping and is narrated by his youngest son, Philip, whose life is a mess. Attending the funeral is Charlie's oldest friend, the legendary, reclusive novelist A.N. Dyer. Women are very much secondary in the story. It is about the complicated and sometimes fraught relationships of men, especially fathers and sons. Mr. Gilbert is the most delightful sort of prose stylist--smart, sophisticated, inventive. As I read, I reflected that for whatever reason, there are few novels that examine, in depth, the internal lives and relationships of men. Mr. Gilbert has a great sensitivity for nuance, and has created some endearingly flawed and fallible characters. This novel was truly a joy to read and one which it's a pleasure to recommend.

The People in the Trees *
by Yanagihara, Hanya (Anchor)
“Never had men gotten closer to eternal life than they did with Norton's discovery. And yet never had such a wonderful promise slipped away so quickly: a secret found, a secret lost, all within the space of a decade." The People in the Trees opens with a bang, in the form of news articles describing the arrest and conviction of a Nobel Laureate scientist for the rape of one of his 43 adopted children! The bulk of the book comprises Norton’s prison memoir (punctuated with asides from his best friend) recounting the 1950’s expedition that made his career. They traveled to a remote Micronesian Island and discovered a “lost tribe” with astonishing longevity. This is an extraordinary tale, beautifully written, and perfect for readers who don’t mind a rather unlikeable protagonist.

Discretion
by Leotta, Allison (Touchstone)
Assistant U.S. Attorney Anna Curtis has been looking for a high-profile case to boost her career, but this may be a little more than she bargained for. A beautiful young woman has been pushed from the balcony adjacent to Congressman Emmett Lionel's hideaway office in the U.S. Capitol building. Anointed “the female John Grisham,” this is Allison Leotta’s second Anna Curtis thriller, and it is a fine entry point for the series. Anna is a terrific character to build a series around. She’s very human, and her personal life is as compelling as her cases. Additionally, Leotta has built a fine cast of well-drawn secondary characters. The author is intimately familiar with the novels’ DC setting, and does the town full justice. Ultimately, mysteries come down to their plotting. The plotting here was both smart and tight. I stayed up far too late reading. Just one warning—this novel’s ending will leave readers clamoring for the next book in the series!

The Impossible Lives of Greta Wells *
by Greer, Andrew Sean (Ecco)
I read 225 books last year and this one was my favorite! The eponymous Greta opens the tale with, “The 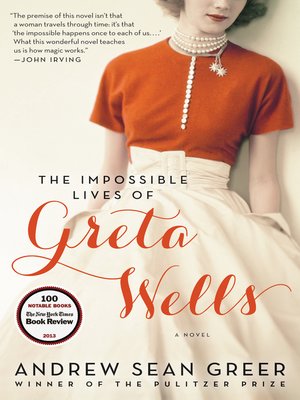 impossible happens once to each of us.” She should know. Having sought out electroshock therapy in 1985 due to depression, Greta awakens in 1918 in a different version of her life. From that time, another therapy has her awakening in 1941 in yet a different version of her life, surrounded by loved ones both familiar and unfamiliar. Throughout the novel she cycles through these three versions of her life, trying to decide which is best. Is any life perfect? Greer get so much right with his fantastic tale! I was fascinated with the juxtaposition of the beginning of one war with the end of another, with the Spanish flu and the plague of AIDS. Mr. Greer has surprising insight into the lives of women, and his language is simply beautiful. I love this book!

The Cuckoo's Calling
by Rowling, J. K. (Mulholland Books)
I was not a fan of J.K. Rowling’s adult debut, therefore I didn’t rush to read The Cuckoo’s Calling when she was revealed to be the author. My loss. When I finally got around to it, it proved to be a real favorite. For me, the difference was in the characters. In short, I fell in love with wounded, down-on-his-luck private detective Cormoran Strike and his new office temp Robin Ellacott. The case they’re investigating involves the death of a supermodel, widely accepted as a suicide, but her brother, an old acquaintance of Cormoran’s, insists it cannot be. “Galbraith” crafts a perfectly credible mystery that will keep you guessing to the end. Still, for me, the success is all about the central characters. No one was more delighted than I to hear there’d be an on-going series. As someone once said, this could be the start of a beautiful relationship.

Lexicon
by Barry, Max (Penguin Books)
In fantasies, words—spells—have the power of magic. But what if you could be taught through science and

psychology to be “good with words?” What if your words could profoundly influence the people around you? What if words could kill? What might that be worth? These are a few of the provocative ideas explored in this speculative, thrilling, and darkly funny novel by Max Barry. I won’t lie, this is a strange, and at times challenging novel. The telling is highly non-linear, and you have to pay close attention to the timeline. But this thriller is utterly unique, fast-paced, and you’ll never guess the ending. Are you ready for something completely different? This novel wowed me!

The Unchangeable Spots of Leopards
by Jansma, Kristopher (Penguin Books)
This tale begins in the form of a (fictional) author's note. It launches, "I've lost every book I've ever written." And ends,"These stories all are true, but only somewhere else." The novel's first-person narrator seems earnest enough, but be prepared for sleight of hand--or whatever the literary equivalent might be. The storytelling here is unconventional, it's meta-fictional, it's challenging, it's non-linear, it's literary, and, oh yes, it is always interesting. His writing is fantastic! It's read-aloud, eminently quotable, just a pleasure to absorb. Everything about this novel is stylish, stylized, and sophisticated. It's also very funny. It's gonzo, romantic, clever, and the sort of book to remind readers and writers both why they do what they do. In short, this is an exhilarating debut novel.

The Interestings *
by Wolitzer, Meg (Riverhead Trade)
So, I’ll start by saying that I read all 538 pages of this book in a single day, so consumed was I by this tale of six friends. They meet in 1974 as teenagers at a summer camp for the arts, and the story follows their con- tinuing (or interrupted) relationships for the next several decades as one by one they either “make it” or resign themselves to more ordinary lives. Wow, did I relate to these characters! They’re not too much older than me, and the events and references of their lives, so carefully observed by Ms. Wolitzer, mirror my own. Each of these six, as well as a supporting cast, is a fully-fleshed and rather fascinating character. Artsy people are endlessly entertaining, and even more so in the hands of this talented writer with a deep understanding of people. Additionally, she has a true gift for language that is as accessible as it is elegant.


So, let me know how this format works for you,  Look for posts on new fiction, non-fiction, thrillers, speculative fiction, juvenile fiction, and more in the near future.

Susan Tunis
I'm a freelance editor living in San Francisco. I pay the rent working for a university, but I work with novelists on the side. I also write book reviews. In addition to posting them to Amazon, LibraryThing, Shelfari, & Good Reads, I wanted to start my own blog to house them. Thanks for checking it out! DISCLOSURE: This blog is a personal blog written and edited by me. This blog does not accept any form of cash advertising, sponsorship, or paid topic insertions. However, we will and do accept and keep free products (books), event tickets, and other forms of compensation (the occasional meal) from companies and organizations. The compensation received will never influence the content, topics or posts made in this blog. Even though the owner of this blog receives compensation for her posts, she always gives her honest opinions, findings, beliefs, or experiences on those topics or products. The views and opinions expressed on this blog are purely the blogger’s own. This blog does contain content which might present a conflict of interest. This content may not always be identified. Specifically, I will review books written by friends and/or editorial clients.